Having my voice heard made all the difference

Andy reflects on his year as a Voice of Mind and the opportunities it's given him to have his voice heard in the run up to the general election.

Last year I was chosen to be one of the, Voices of Mind.As I reflect over the last twelve months, I think about the friends I have made, the successes we have achieved and the opportunities I have had to have my voice heard.

At our first meeting it was clear that by some chance or judgement a mighty team had been formed. Sometimes when people with lived experience of mental health get together, there is a group of individuals, all with a story to tell, a personal agenda and an opportunity to spout without listening. It's justified because generally we are not listened to. But this wasn't like that We listened, we learnt and we quickly realised what type of group we were - each individual had something to offer and also had a great willingness to give. Well done whoever brought us together.

Our personal stories were gathered, photographs were taken and films were made, a manifesto was conceived, which accumulated many years of experience and identified a clear vision for the future.

The early days were saddened by the loss of Becki, who in her short time with us had forged friendships and blew us away with her articulate passion to make sure, her people, got the best possible care. Her message lives on thanks to the kind generosity of her family.

I attended the Labour Party conference as a Voice of Mind in Manchester and saw first hand the hustings process. I was not deterred but more determined. After all, these were the people who could make a difference. Even the fire alarm going off at 2.00 am in the hotel did not take the shine off.

The highlight of meeting my MP Rosie Winterton was the whip on her wall, (her being labour whip) and her willingness to share her own personal experiences, I must have one of those faces. 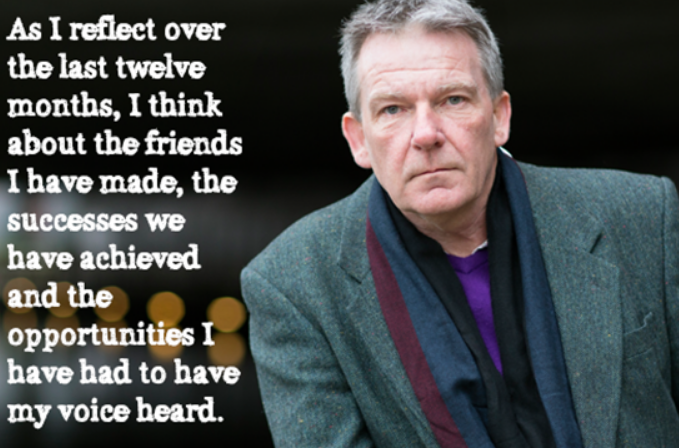 There were some early struggles. Trying to involve local Mind teams proved difficult, but I quickly appreciated that their time was precious doing what Mind does locally. Leave the campaigning to people like me who like the sound of their own voices. I did meet local members and they do a terrific job.

I felt proud when the films were released and documents produced, did I really say that? It was weird to keep seeing myself on Facebook etc.

…Health campaigner’ being on the second line.

I was interviewed with Bev Callard off Corrie (Liz) and was able to hobnob with the great and the good at the Mind Media Awards. I had an interesting experience in Norwich attending a question time set up by John, (a fellow Voice of Mind) and was able to tell Paul Farmer not to ignore my being on the panel. Sorry Paul. Last week I was on Look North questioning Nick Clegg, how far I had come!!

Not wishing to let celebrity go to my head, I hope we have had an effect. I listened to a programme during lent when a guy said that his experience of depression amongst other things had taken away his dignity and the opportunities to use his talents. I am grateful that I have had the opportunity to use my skills to influence people and the opportunity has certainly given me back some dignity.

So have we had an effect?

Well read Manifesto for the Mind by the Liberal Democrats, is plagiarism a crime? It was a bit like ours!!!

If you have access to BBC i-player, listen to All in the Mind BBC Radio 4 programme broadcast 28 April. The first section about all parties’ manifestos are mentioned. Emily Craig compared the last election manifestos with this year’s. Her conclusions are only two parties mentioned mental health at the last election, this time all mention it as an area of importance.

All in all it’s been a great success, so well done to Mind, Time to Change and to all charities working in mental health. I’m sure our campaign has had an effect in raising the profile of mental health.

Most of all well done to my fellow Voices of Mind.

For me it would be great to get involved in some small way in the future, maybe my skills will come in handy again, thanks for giving me back some dignity.

Finally use your vote.