All we need is acceptance and support

Regan blogs about her experience of transitioning and how she struggled to find the acceptance and support she desperately needed.

"I suffer from depression, anxiety and stress."

I used to be a custodial officer, I was in the custodial industry for 10 years. I decided to transition in 2010 and to officially go to work as a woman in 2011, working in a cellblock. On a daily basis, I would face abuse from prisoners, verbal and physical, and indirect discrimination from the management team of the private company that I worked for.

People would never get my pronouns right, they wouldn’t even make the effort. They’d just say “Oh well, we’ve known you for so long we can’t get used to it. You’re just going to have to lump it. We’re going to call you he and Mr. It doesn’t matter.”

I told my manager I was on hormones and that, from time to time, I could be getting very emotional because transitioning is like going through the menopause. I also told her I may have to go outside from time to time as I didn’t want to break down in front of everyone. My manager threatened me with suspension.

I just couldn’t take it anymore, I couldn’t take the abuse and inappropriate questions. Eventually I collapsed on the floor at my work station. I didn’t have any support. The duty inspector at the custody centre had to give me a lift home and I didn’t go back after that.

"I wasn’t fit enough to work for about two years."

When it came to going on benefits, I was labelled as a ‘special case’ because I was a transsexual. Every time I phoned up the benefits office to ask for information about my benefits, they would have to contact a manager to get special permission to access my details. This would take all day and added to my stress levels even more. 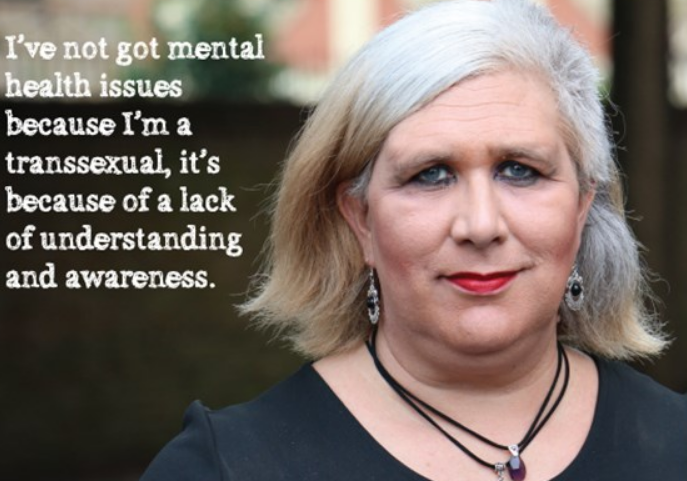 Christmas last year, everything came to a head. I was feeling alone. I was isolated. I didn’t have anyone to talk to. I didn’t think anybody cared about me. So I tried to end it all. A friend happened to turn up on the door, just out of the blue. He called an ambulance and I ended up in hospital.

"That’s been my life for the past five years. All because I wanted to be myself. I’ve always thought about other people with little thought for myself."

All transsexuals want is understanding and awareness – especially in the workplace because that’s where a lot problems arise for us. Also, government agencies like the DWP. Why should I be labelled a ‘special case’ just because I’m a transsexual? And it’s the same for every transsexual whether female to male or male to female.

There’s a saying “Just accept me, don’t try and understand me.” If we can all do that, we can cut mental health problems down in the trans community by a significant amount.

Coming out to my therapist

Simon tells us about the challenges he faced in coming out to his therapist as gay, and how, of all the times he has had to come out over the years, this was in some ways the most difficult.

Being bisexual and my mental health challenges

Sanisha faced mental health challenges in the past but no one understood how they affected her as a bi woman.

How I came to terms with my life changing diagnosis

When Philip found out he had HIV and hepatitis C, he was devastated, but acceptance has left him empowered.

Why I'm going to Pride with Mind

Ed shares why, as a queer trans person, Pride is so important and why it's so vital Mind is there too.
More similar stories