Mind and EFL launch On Your Side partnership in Wales

New research released today by the mental health charity Mind shows that over half of people (56 per cent) agree that football fans find it easier to show their emotions at football matches than at any other time. The polling* comes as Mind and EFL launch their two-year On Your Side partnership and a striking new shirt design for all EFL Clubs.

To mark the partnership the 2018-19 EFL season will see, for the first ever time in English football, a new lettering design which incorporates the charity’s logo into the player name on the back of every EFL shirt across all 72 Clubs in the Sky Bet Championship, Sky Bet League One and Sky Bet League Two. The 'squiggle' part of Mind’s logo will be joined into the first letter of the player name – with the player’s name replacing the word Mind – in a unique design to celebrate the On Your Side partnership.

Research commissioned for the launch of On Your Side shows that a third of people (30 per cent) would find it easier to explain the ‘offside rule’ to friends or family than what mental health is, with men twice as likely to agree with this as women (40 per cent to 21 per cent). It also found that only half of people agree that when things get tough they feel like their friends or family have got their back. Mind and EFL wants to show that if things get tough, they have your back too. 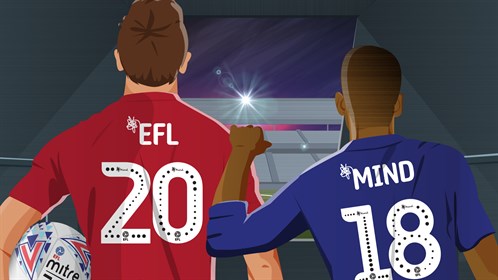 With over 18 million fans attending EFL matches each season (and almost 42 million watching on TV), Mind and EFL hope that the increased visibility of mental health at matches will promote awareness and understanding among new audiences. Through the partnership Mind will also be working directly with EFL football Clubs and their Community Trusts to improve mental health support within the Clubs and their wider communities.

Mind were chosen to become the EFL’s Official Charity Partner from the start of the 2018/19 season for two years. The partnership will look to focus on the following areas:

• Raising awareness about mental health with fans, Clubs and staff
• Raising funds to deliver life-changing support
• Improving the approach to mental health in the EFL, in football and in wider society

“Football and emotion go hand in hand, and going into the 2018-19 season we hope that EFL football fans who feel at ease showing their emotions on match days, will also feel able to carry this on into all areas of their lives.

“Incorporating an iconic part of Mind’s logo on the shirts of all 72 EFL Clubs, including of course Swansea and Newport in Wales, is just the start of achieving real change by raising awareness and understanding of mental health in football, sport and society as a whole. This is the first time in English football that a charity logo has been incorporated into the player name on the shirt. We hope that seeing this ground-breaking design on the backs of teams’ shirts throughout the season will inspire millions of fans to get behind Mind and EFL’s partnership.”

“Football has long been used to break down barriers and, as we head towards a new season with the renewed optimism that inevitably brings, I’m really hopeful that our burgeoning partnership with Mind will start to demonstrate how collectively we can tackle what remains very much a silent problem.

“The research conducted has provided some interesting insights for us to consider and the launch of the new ‘On Your Side’ partnership will not only start to raise much needed awareness about mental health across a number of key constituents but also make a significant step forward in how society approaches the varying degrees of mental health issues.

“A big part of our partnership is showcasing the work on a national and international platform and this will primarily be achieved through the introduction of the Mind names and numbers on every players’ shirt in our competitions this coming season alongside the introduction of what we hope will become an iconic ‘On Your Side’ pin badge that will be worn by managers and players up and down the country week in week out.”

“We’re delighted to be part of Mind and the EFL’s On Your Side partnership. We understand how hard it can be to start conversations about your mental health and know how important it is to break down the barriers people face.

“Our players will be proud to wear the Mind logo this season and we hope to inspire people to open up about their mental health. We’re also helping raise vital funds for Mind by offering fans the chance to donate £1 with every shirt printing option and then going one step further by matching all donations.”

* The research was conducted by Censuswide with 2,000 UK respondents between 20.04.2018 - 23.04.2018. Censuswide abide by and employ members of the Market Research Society which is based on the ESOMAR principles.