Depression, asking for help & speaking out

Our volunteer Sarah blogs about her experience of depression and why she appeared on last night's BBC Two program Trust Me I'm a Doctor.

The decision to appear on BBC’s Trust Me I’m a Doctor was not a hard one. It stemmed from a pledge I made to myself at the beginning of my treatment for depression: to be honest with those around me about my illness. Back then, in the depths of my despair, I never imagined considering talking about my own experiences on national television.

"Our appearance was motivated by a desire to minimise the sense of isolation and devastation that depression can bring if it goes unacknowledged and untreated."

The journey from mental ill health to television appearance and relatively good mental health has been a long one – over twelve years to be precise. My persistent feelings of low mood and inadequacy began when I was around fourteen years old, and quickly dismissed as the usual teenage misery that every young person around that age is expected to go through. I had no time for such feelings either; I became used to compartmentalising my thoughts; lack of confidence in myself and my abilities were lumped together with other more pervasive feelings of worthlessness and guilt. I felt too much pressure upon me to waste any time feeling sorry for myself, as I saw it. I did not talk about it, and so I developed a mask for my performance in the everyday world.

"It is an act of immense courage for someone with depression to reach out for help."

Things carried on in this vein until my second year of university; feelings went unaddressed and intermittent complete mental agony was somehow worked through. I tried to rationalise it with the thought 'You’ve got nothing to feel rubbish about'. It was only when I found myself physically unable to get out of bed one morning before a lecture, that I realised I needed some help. 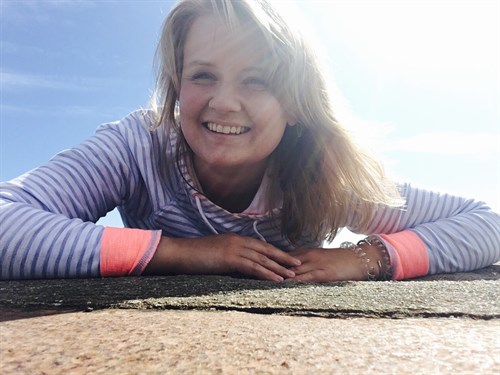 Depression at its worst is the most horrifying loneliness; like being gagged and bound by your own mind. It robs you entirely of your sense of self, of your wit your wit and sparkle, of your sense of enjoyment. At my very worst I did not feel anything at all; I would describe my mind as a black numbness, and the world looked grey to me. I think I looked grey too - I remember a friend saying so.

It is an act of immense courage for someone with depression to reach out for help. I found I could not physically speak at the moment I asked for some. I had spent a couple of agonising weeks feeling like a very full cup of tea: any slight jog in my delicate emotional state and I would spill tears everywhere. I had to write how I was feeling in an email to my parents instead. And to my surprise, instead of feeling like I was admitting defeat, I felt nothing but relief that I had shared the burden outside of my own head. It was from this moment that my journey to where I am today began.

"Yesterday’s programme was particularly good in communicating the importance of talking, whether it is to your GP, a friend or family member."

I lost a great deal of innocence when I understood, only a couple of years ago, that my mind and I were not going to be on good terms for some moments of my life. It is on uneasy acceptance that I have learned to deal with in my own way – but I would never have made the recovery I have without the simple act of expressing how I felt to those who cared for me.

Yesterday’s programme was particularly good in communicating the importance of talking, whether it is to your GP, a friend or family member. Lol, Richard, Kath and myself all gained a renewed perspective of the illness that has affected us in such varying ways, and the impact it had, not just on ourselves as individuals, but those around us too.

I think I speak for all four of us when I say that our appearance on yesterday’s programme was motivated by a desire to minimise the sense of isolation and devastation that depression can bring if it goes unacknowledged and untreated. If that involves going on national television to relay the message, then so be it.

Read our information on depression including advice on self care, how friends and family can help and where to get support.

Depression Mental health in the media

Jean Slater and her contribution to mental health awareness

Selina blogs about her experience of perinatal mental illness and working with EastEnders on Stacey’s storyline.

“Man up”? Getting more “men” in mental health

As Part of Movember, Mind Cymru's Lee Cambule talks about why more men should open up about their mental health and the support they can gain.
More similar stories