A general guide on how the Mental Capacity Act affects you and how you can plan ahead for when you no longer have the mental capacity to make decisions for yourself.

View this information as a PDF (new window)

What is a deprivation of liberty?

Your liberty can only be taken away from you in very specific situations. The Mental Capacity Act calls this a deprivation of liberty. It should only be used if it is the least restrictive way of keeping you safe or making sure you have the right medical treatment.

Your liberty can only be taken away under the Mental Capacity Act if:

Jon has memory problems that have got worse over time, and lives in a care home. Because of his condition, he is less aware of danger than a person without the condition. He is unable to cross a busy road on his own and does not understand that it is dangerous to cross a nearby railway line.

Jon needs constant supervision and also has to be stopped from going out on his own. This usually involves keeping him in a locked room and physically stopping him if he tries to go out on his own. To keep him safe, this has to be done on a regular basis.

It would be unlawful for the staff to do this without using the deprivation of liberty safeguards, so they should apply to the local authority for permission, called a 'standard authorisation', as soon as they realise it is necessary.

Is a deprivation of liberty the same as being detained under the Mental Health Act?

No, it is not the same as being detained under the Mental Health Act 1983 – you do not need to have treatment for a mental health problem in order to be deprived of your liberty.

What are the deprivation of liberty safeguards (DoLS)?

The Mental Capacity Act says that your liberty can only be taken away by health professionals if they use the procedures called the Deprivation of Liberty Safeguards (DoLS), or if the Court of Protection has granted permission. This protects you from having your liberty taken away without good reason.

Key elements of the Deprivation of Liberty Safeguards

How does the authorisation process work?

Before you can be lawfully deprived of your liberty, the care home or hospital where you are staying must get permission from the relevant authority (which would be a local authority, or if you are in hospital in Wales it can also be a local Health Board or the National Assembly). This is called applying for an authorisation.

Before the deprivation of liberty is authorised, you will have six assessments, which may take place at the same time. You cannot have your liberty taken away unless all the six assessments are met.

Flowchart: How does the authorisation process work? 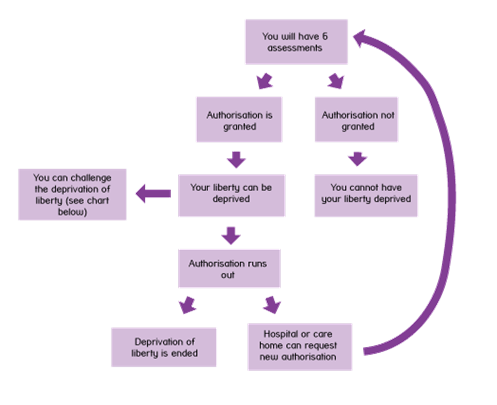 Is a deprivation of liberty authorisation always granted?

Your deprivation of liberty authorisation will not be granted unless all the conditions in the six assessments are met.

The authorisation must also:

The care home or hospital where you are must do what it can to make sure that you and your relevant person’s representative understand:

If your deprivation of liberty authorisation is not granted, the supervisory body must inform:

Your care plan may need changing to avoid a deprivation of liberty.

Can I challenge the authorisation in court?

If you think you shouldn’t have your liberty deprived, you can challenge it by:

Appealing to the Court of Protection

Read more about the Court of Protection.

Flowchart: How can I challenge the authorisation? 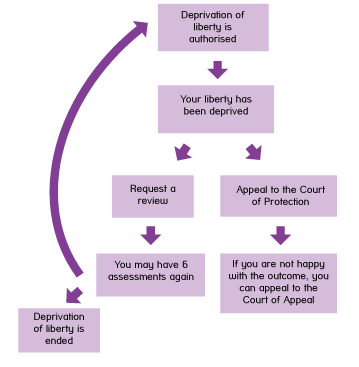 Where can I get support?

You can get support from:

What if I am in my own home or in supported living?

The Deprivation of Liberty Safeguards can only be used if you are in care homes and hospitals. If you are deprived of your liberty anywhere else an application must be made to the Court of Protection. This should be made by the local authority or Clinical Commissioning Group (CCG) that made the arrangements for your care.

How does the application process work?

The local authority or CCG applying for an authorisation must provide the court with:

The Court of Protection will usually appoint a litigation friend or representative to act for you. They can object to the arrangements for your care if they don’t think they are in your best interests.

The Court of Protection will authorise the deprivation of liberty if it is satisfied that:

The authorisation will last for up to a year and will need to go back to court before it ends. It can be returned to court earlier if:

How can I challenge the authorisation?

You should be involved in the application as far as possible and able to give your views to the court. Once the authorisation is made you or your representative will need to apply to court if you want to change the order.

A litigation friend is someone who can take your place in legal proceedings, if you lack capacity to take part yourself. For example, the litigation friend could instruct solicitors on behalf of you, or speak to the judge directly on your behalf.

A litigation friend could be a family member, a friend, or the Official Solicitor.

CCGs are groups of GP practices and other healthcare professionals and bodies that are responsible for commissioning most health and care services for patients. They have replaced Primary Care Trusts (PCTs) in England.

A deputy is a person the Court of Protection appoints to make decisions for you once you have lost capacity to make them yourself. A deputy usually makes decisions about finances and property. The court can appoint a deputy to take healthcare and personal care decisions, though this is relatively rare.

The Court of Protection makes decisions and appoints deputies to act on your behalf if you are unable to make decisions about your personal health, finance or welfare.

A lasting power of attorney is a legal document that lets you appoint someone, called an attorney, to make decisions for you.

This is someone who can support you in all matters connected to a Deprivation of Liberty Safeguards situation, like requesting a review of the deprivation of liberty and making an application to the Court of Protection. It can be someone like a family member (and often is). You can choose who you want it to be if you have the capacity to do so.

An RPR must be:

An IMCA is a specially trained advocate who can help you if you do not have the capacity to make particular decisions. NHS bodies or local authorities must take an IMCA's views into account when making decisions that affect you if you have lost capacity. They are normally appointed by the local authority in England, and by local health boards or other NHS bodies in Wales. They must be independent people of integrity and good character with appropriate experience and training.

See our page on IMCAs for more information.

A deprivation of liberty is where your liberty is taken away from you - that is, you are not free to leave and you are under continuous supervision and control. The Mental Capacity Act says that the law allows this only in very specific situations.

This may happen to you if you need to go into a care home or hospital to get care or treatment, but you don't have the capacity to make decisions about this yourself.

Health professionals must act in your best interests before taking certain steps that affect your care and treatment.

The Mental Capacity Act has a best interests checklist, which outlines what health professionals need to consider before taking an action or decision for you while you lack capacity.

An advance decision is a statement of instructions about what medical treatment you want to refuse in case you lose the capacity to make these decisions in the future. It is legally binding.

When the Mental Health Act talks about someone with mental health problems and whether or not they should be sectioned, it often uses the term 'mental disorder'. The Act says that this can include "any disorder or disability of mind".

Mental disorder can include:

If you are in a hospital or care home, your liberty can normally only be taken away if health professionals use the procedures called the Deprivation of Liberty Safeguards. This protects you from having your liberty taken away without good reason.

This is a law that applies to England and Wales which allows people to be detained in hospital (sectioned) if they have a mental health disorder and need treatment. You can only be kept in hospital if certain conditions are met.

See our pages on the Mental Health Act for more information.

See our full list of legal terms.
Was this page useful? Tell us more Tell us more
X
error_outline

There has been a problem submitting your feedback.

Thankyou for providing your feedback.

This information was published in November 2017.

This page is currently under review. All content was accurate when published.

References are available on request. If you would like to reproduce any of this information, see our page on permissions and licensing.