Melanie blogs about experiencing psychosis and her journey to recovery.

In the grips of psychosis that no-one realised I was in, I desperately tried to end my suffering by taking my own life. If only someone had picked up on it and helped me my life would never have been in danger.

Instead, the doctors and psychiatrists I had seen said I had depression and anxiety and treated me for those but nothing they offered helped me as I was actually having a psychotic breakdown and needed to be in hospital.

"I was unable to focus, work, relax, sleep or eat and I couldn't follow conversations or think straight."

My stress-induced breakdown went on for seven long frightening months before I finally attempted suicide, bizarre thoughts afflicting me and my brain going haywire.

Professional after professional missed the signs of psychosis, one even stating "No psychosis present" in his report.

"I believed thoughts were being implanted in my mind from the TV and that my legs were no longer working."

I was unable to focus, work, relax, sleep or eat and I couldn't follow conversations or think straight. I believed thoughts were being implanted in my mind from the TV and that my legs were no longer working. I felt like I was going crazy and was so worried about being "locked up" that I didn't divulge all my strange thoughts to the professionals, understandably, but surely they should have known the signs?

One day I felt like my brain had slipped out my head and onto the kitchen floor. It was terrifying. My family and friends were desperately worried about me and I had lost so much weight I was really frail. My cheeks and eyes were sunken and a big lump appeared on my forehead which would literally throb. I was unable to string a sentence together and felt nervous and self-conscious as if I was being watched constantly. 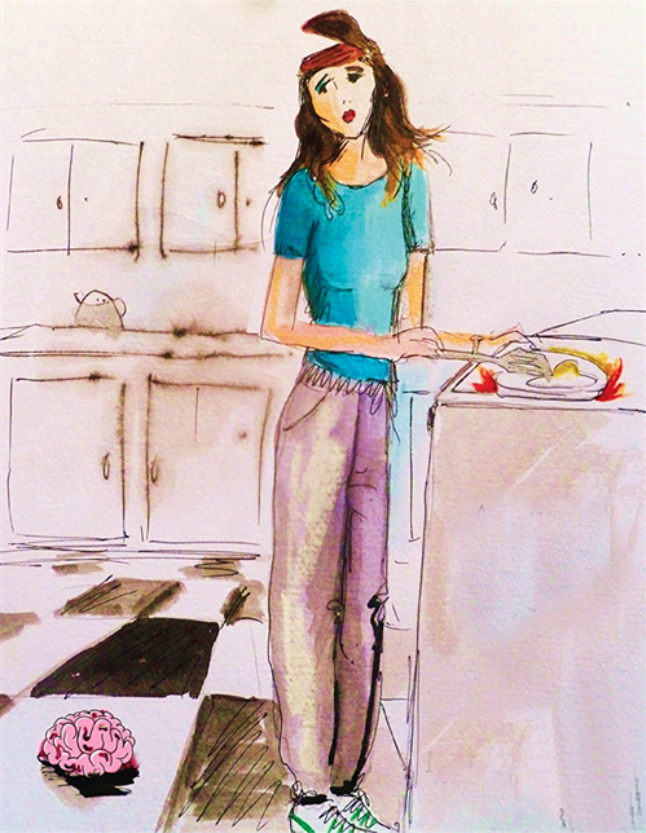 "It was all I'd imagined and worse."

After my suicide attempt failed I was taken to an assessment centre where they deemed me so unwell that they sent me to a secure psychiatric hospital where I stayed for three months. I hated it. It was all I'd imagined and worse. But, after suffering an acute psychotic episode in there, where I thought all my limbs were redundant, I was finally diagnosed with psychosis and administered the relevant medication for my condition.

These powerful anti-psychotics had some horrendous side effects including making me go stiff like a statue, making the room spin then stop then spin again, making my tongue swell up and making me go mute. They explained that it was a case of finding the right medication which agreed with me and that, in time, I would recover. I never believed this and became paranoid that I was in a government drugs testing unit. It was unbearable in there but that was where I needed to be (not that I realised this at the time.)

"It was like a light switch went on inside my brain."

In time the desire to die melted away and I began sleeping again. On my third month and on the fourth or fifth drug concoction it was like a light switch went on inside my brain. I could think clearly, hold a conversation, laugh again. It was magical. I had recovered. I walked out of there my old self and almost as quickly as it had all started, the suffering had stopped.

I am so grateful for the support I received in hospital and afterwards from The Early Intervention Team who assigned me an amazing care support worker who kept in touch for the following three years to make sure I stayed well and didn't relapse.

"I could think clearly, hold a conversation, laugh again."

It seems there is a heap of help and support once you hit crisis point, but where is the help beforehand? Psychosis is one of the biggest causes of suicide. How many more tragedies are there to be before things change?

My experience of psychosis

Louise blogs for us about a difficult time in her life when she experienced psychosis. She talks about her journey to recovery and her plans for the future.

We need to talk about Lisa

Eve worked with Eastenders on their storyline about Postpartum Psychosis as a media wever, she feels that the way psychosis is handled in current episodes of the programme has been much less sensitive.