Taking the mental health elephant out of the room and on a parade...

Kymberly blogs about, "The Elephant on Parade", a community fundraising project designed to get us thinking about mental health and "the elephant in the room".

There’s an elephant in the room.

We ignore it, choosing instead to talk about how busy the A65 was this morning

‘I’m fine’, the only response we give in the presence of the elephant

But we all know it’s there

It’s affected us all

Let’s talk about the elephant in the room.

Most of my experience with mental health is second hand. Having both family and close friends with some form of mental illness has greatly influenced my passion for it. As a bystander to mental illness I often felt helpless, it felt as though I merely had to sit back and watch my family and friends combat this internal issue as nothing I could do would make them better. But I quickly learnt that I didn't have to make a grand gesture, it was the small things that counted. It was simply asking how their day had been, spending time with them watching a film or even just making them a cup of tea. It was in these everyday small actions that I showed my support and that my support was felt. I learnt never to underestimate the power of small acts of kindness.

When I started university, I happened across a York based Theatre Company comprising of mental health service users. Out of Character Theatre Company were looking for students to sit in on sessions and help run warm ups/workshops. I jumped at the chance, excited to have as much experience as possible. However having never worked in this sort of environment I was somewhat apprehensive, what if they were ‘different’? And, in my unaware state, different meant scary and strange.

I was a bundle of nervous energy on my first day with the group but my fears were unfounded and almost instantly proven wrong. The group were quite frankly one of the nicest and most welcoming I’d ever encountered, making my three years at university all the more enriching. This experience culminated in me wanting to act, wanting give back, wanting to promote better mental well being whilst simultaneously fundraising.

As a child I was very ambitious, pushing myself and always aiming for new heights. As I’ve grown older I’m no different and I think that’s where the idea to build an elephant came from.

But before I get ahead of myself I better give you a bit of context as to why I decided to build an elephant. The saying ‘elephant in the room’ is used to describe an issue that people are aware of but choose to avoid talking about. I wanted to use this saying, prompting people to discuss their elephants, to unload their worries. This was when I found Elefriends, Mind's online peer support community. My concept plus this site seemed to marry perfectly.

So four months of planning, three weeks of elephant construction, and a whole lot of elbow grease later, the project had become a reality. Now I’m not going to lie it was incredibly tiring and at times stressful but definitely the most rewarding thing I’ve ever done!

Read about Side by Side 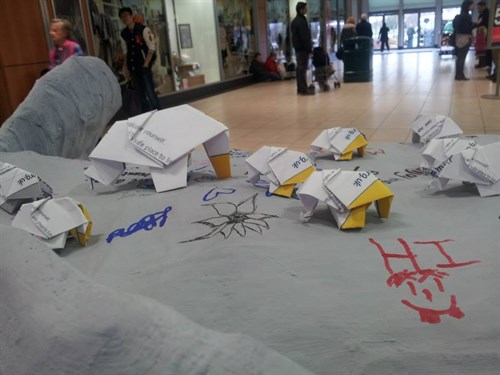 So, what was the project?

The elephant on parade is a community project aiming to provoke the public into thinking about their own/others mental well-being. ‘Ele’, the elephant post box, took its position at York designer outlet on Saturday 15th March to encourage the public to open up in a safe, confidential and supportive environment.  Posting their worries into ‘Ele’ the public were then invited to take away one of the origami elephants made from leaflets promoting Elefriends.

All the planning, all the aspirations had finally met a reality and it proved a success, raising just over £360! I always thought fundraising could only be for sponsored walks, bag packing or marathons (all incredibly worth while!) but this project has taught me that I don’t need to rein in my imagination. Almost anything can be turned into a fundraiser you’ve just got to have the right tool kit. Without a tool kit you’ll find fundraising potentially very lonely and very difficult. And although everyone’s tool kit will be different I thought I’d leave you with mine.

My hindsight based tool kit:

A drive to make a difference

Matthew blogs about his experience of peer support.

Tracey blogs about our new online community where you can listen, share and be heard.

Somewhere I could be heard

When Sam was finding it hard to cope, he found help in Elefriends, our supportive online community.