Chris blogs about his experience of mental health and why he was inspired to skydive for Mind.

“Cross your arms, put your head back and enjoy the ride.”

It may seem strange, but when I arrived at the airfield that day, it was as frightening a prospect to me as answering the phone was three years earlier.

Almost three years ago to the day, I was on a stag weekend for one of my closest friends. We spent the weekend doing usual British stag-do things: drinking, dancing, exploring, getting into trouble! It was a fun trip, but something was amiss. I felt distant, ‘shaky’ and generally a bit ‘flat’.

The following weeks turned out to be some of the most alarming, confusing and difficult I ever experienced. I found it increasingly difficult to focus and it was almost impossible to make simple decisions.

At work I would sit at my desk and just stare at my computer screen without any idea what I was doing. Whenever the smallest thing happened, like missing an email, or answering a question incorrectly, I would go into panic mode.

I found myself more and more obsessed with never getting things wrong, trying to ensure that I had full control over everything in order to avoid the fear and panic of failing at something again.

Eventually, I was talking to my brother on the phone and I kept saying “….the way I’m feeling at the moment…”. He suggested I might be depressed.

Over a long time, with the help of medication, talking therapy, and the amazing support from some of my friends, my depression has lifted.

After my experience I was keen to support others who were having or might one day have the same struggles I did. Then I found Mind.

As for how I chose to skydive? As soon as I saw the opportunity, it seemed fitting - something where I had to give up complete control of everything. After all, not wanting to give up control of anything had been one of the biggest symptoms and sources of anxiety during my depression.

In the sky above the airfield on that sunny day, watching the vast countryside beneath, feeling exhilarated, the air whipping over my face as I was ‘flying’. I laughed uncontrollably to myself with glee.

Find out more about skydiving for Mind. 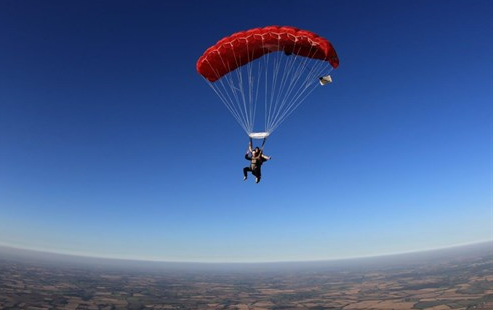