Running marathons for my dad

Kev writes about losing his dad to suicide and running to raise awareness of mental health problems.

This blog talks about suicide.

For more information and support on suicidal feelings go to mind.org.uk/suicidalfeelings

I lost my dad to depression in 2003. By that, of course, I mean he took his own life. I vividly remember the phone call I got from my sister in my first week of university telling me what had happened.

In that moment everything changed – both for the worse and for the better. It had a huge impact on me, my brother, my sister and anyone and everyone who knew my dad.

Sadly, it wasn’t so unexpected. Dad tried to take his own life eight times and one of the things it took me longest to come to terms with was an awful, gut-wrenching feeling of inevitability. My immediate thought was “well, at least it can never happen again”.

I grew up in a loving family that was a bit weird and wacky, but full of fun. My dad was of the generation that thought mental health was not something to talk about.

"I think his bravado and the way he bottled up his troubles was what broke him."

After his first attempt, he seemed to come around to the idea that is was a mistake. The second, third and fourth were the same. Every time he didn’t die, he realised he could live – and live well. But things would overwhelm him again and it just turned into a cycle where he never quite got well enough and was never able to talk about what he was going through.

A lot has happened since 2003. It’s strange to think that when Dad died, Youtube, Facebook or Twitter weren’t around and video calls on a mobile were something in science fiction films. Since he passed, four of his grandchildren have been born.

"My son, Jesse, who’s three years old, knows all about his Grandad and will always be taught that there are no questions that he can’t ask."

I’m sad my dad will never meet him because I can see elements of Dad in Jesse’s personality – nothing would have made me prouder than watching them laugh and play together.

As I get older I realise I’m not the person I thought I would be. I’m not my dad but I’ve taken his best bits and made them my own. I’ve learned from him to be headstrong, hardworking, fair and honest. But I’ve also taken his worst bits and learned from them. Unlike him, I’m open and honest, I have the ability to ask for help and can see different perspectives.

"My dad is why I support Mind."

I became a personal trainer to help people who want to link their physical health to their mental wellbeing. I want to show people that goals are important, that challenging yourself is good. But I also want to show people that it’s OK not to be OK – it’s OK to not always succeed. I ran 52 marathons in 2011 and ran from Paris to London in 2012. I’ve been an Olympic torch bearer and have helped hundreds of people complete marathons. I love it. It blows me away seeing people achieve things beyond their dreams. This is why, with my good friend and fellow Mind supporter, Clare, I’ve organised Marathon In A Day. 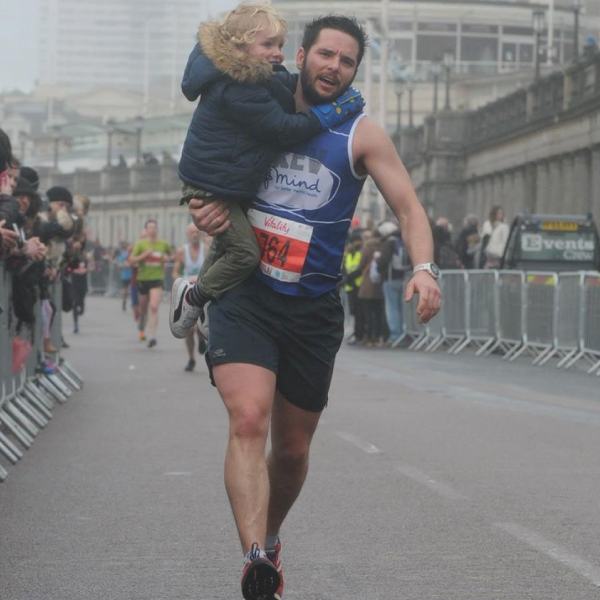 Marathon In A Day is a unique, inclusive, and fun virtual running event for everyone. It’s really simple, you can take part anywhere you like and the rules mean it’s for everyone – from the fittest of the fit, to those just starting their journey. You can take part as an individual or in a team of up to eight and in a single 24-hour period, you have to cover a marathon distance – 26.2 miles. How you choose to do it is up to you and only the time you spend running counts towards your time. So you can go out and run a marathon, submit your details and claim a medal. Or you could try something different and run 26, single mile reps, taking half an hour’s rest between them. Or you could run two halves. As a team of eight, you could each run 5.275km together or individually and add them up. Or one brave person could run half the distance and the other seven do smaller amounts. You get the idea. It’s totally and utterly flexible.

Clare and I hope that Marathon In A Day will become the virtual race to take part in. Everyone who runs, regardless of how far, will get a brilliant medal and will be supporting Mind. This year, it’s going to be over the weekend of 1-3 September, although frankly, we can be flexible on that, too – you just have to let us know if you’re doing it at a different time. It’s that simple.

!While running marathons and putting on events won’t ever bring my dad back, it does give me a focus and it allows me to use his memory to help to show people that there are better ways than choosing not to live."

He’d be so proud of the stuff I do and I’ve no doubt that if by some miracle he could talk to me now, he’d be convinced that opening up and talking would have really helped him. More coverage of mental health in the media in recent years has really helped to address the stigma surrounding mental health but we’re nowhere near where we need to be. I won’t stop until we get there.