David blogs about losing his daughter Charlotte and keeping her memory alive whilst fundraising for Mind.

David is 71 and has been married for 50 years. He adores his wife and dog and is determined to reduce the number of people who take their own life.

You cannot judge a person by the wealth they have, or their position in life - you can only value them by the imprint they have made on the minds and hearts of those who knew them. Our daughter Charlotte made a truly deep impression on everyone who knew her, and especially us, her parents.

We began Charlotte’s life as her godparents, as she was born to my wife’s sister, Beryl. Sadly Beryl died when Charlotte was very young, and soon after we lost her brother, Lloyd. It was a very difficult time in our family, but Charlotte brought a ray of hope into our lives. She was 11 by the time we were able to make the adoption official, and by then she was happy calling us Mum and Dad, having lived with us since she was 5. Being able to call Charlotte our daughter meant the world to us, and she lived with us happily until she was 17, when she joined the army – something she had always said she wanted to do.

"Being able to call Charlotte our daughter meant the world to us – she brought a ray of hope into our lives."

Charlotte served 10 years in the army, furthering her career and particularly excelling at sports, representing her regiment in rugby, basketball, athletics and skiing. She served two terms in Northern Ireland and one in Kosovo before leaving the army to serve as a police constable in the Midlands for 5 years. She went on to travel and learned many skills including kick boxing in Thailand, firearms in Belgium and obtained her Yachtmaster Certification. However, being a very social animal, she missed the closeness and camaraderie of forces life and re-joined her old regiment.

Everything seemed to be going so well for Charlotte – she met and married her partner Alison, had a new posting as an army recruitment officer created especially for her and was in the process of buying a house in Birmingham. But as right as things seemed to be going on the surface, it seemed she was still haunted by depression and struggling with her demons each day. Eventually they overcame her, and Charlotte took her own life.

"As right as things seemed to be going on the surface, it seemed she was still haunted by depression and struggling with her demons each day."

Her regiment flew their flag at half mast, an honour accorded to every serving member of the regiment who has died, but, in an unprecedented show of respect, the other two regiments stationed at the same barracks also requested that they be allowed to fly their own regimental flags at half-mast. This is an honour previously afforded only to those of the rank of Brigadier or above, which says so much for the respect Charlotte was held in. Over 600 people attended her funeral, at which a number of her rugby friends discussed the idea of staging a game in her honour. This grew into The Charlotte Lloyd Memorial Ladies Rugby Tens Tournament, which we have held annually for the last three years in aid of Mind. 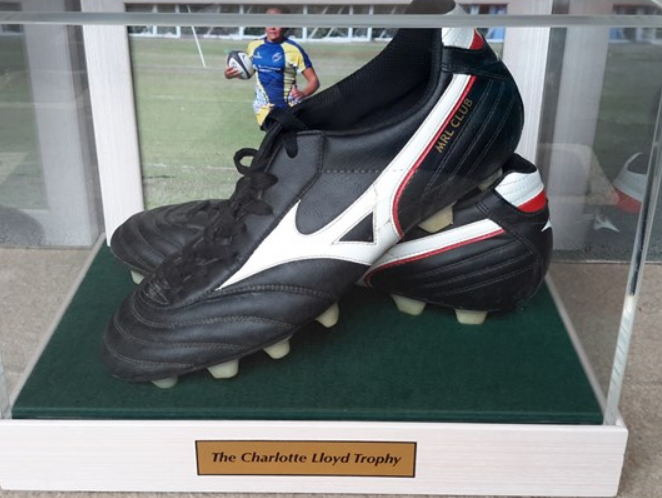 The tournament is made up of 6-10 ladies rugby teams, including ‘Charlie’s Chargers’, a mix of Charlotte’s friends from all over who all come together to commemorate a truly unique person and raise money for Mind. As well as the matches and awards we have a bouncy castle, rodeo bull, inflatable jousting and in the evening a DJ, live music and raffle. It’s a really fun day for everyone involved, but for us it’s bittersweet – it’s lovely to see so many of Charlotte’s friends again, but painful to know that the person who would have loved it most will never be there.

"It’s a really fun day, but for us it’s bittersweet – knowing that the person who would have loved it most will never be there."

The Royal Logistics Corps have done us the honour of renaming their Ladies Rugby Player of the Year Award “The Charlotte Lloyd Player of the Year Award”, and I am honoured that they always invite me down to present the award – again, a difficult but very proud day for me. For Charlotte’s funeral we asked that, instead of flowers, donations be made in her name to Mind, and every year £1000 from the tournament is donated in her name.

Charlotte taking her own life shows how badly depression can affect even the strongest and most blessed people. It is not something that anyone should be ashamed of struggling with, and we hope that increasing awareness of just how debilitating and serious depression can be will result in less people taking their own life. We’re glad to be keeping Charlotte’s name and memory alive in our fundraising whilst helping others with mental health problems.

Raising money brought our community together

When their friend took his own life, Anna and her community of farmers, came together to raise money for Mind.

Going from grief to 10K

Carolyn shares her story of how she found solace in running, and how she turned that in to fundraising success.

Mind is helping me cope with losing my son Robert

Tracey blogs about how starting a fund on Memory Space is helping her come to terms with her grief.

For someone who once felt so defeated and broken I’ve found faith and strength in myself, and my fundraising shows that other people believe in me, too.
More similar stories