My experience of craftivism

Mind campaigner Annie shares her experience of using our craftivism kit to send a note to her MP.

Annie is a MIND campaigner and feels strongly that our NHS should be our top priority. She is retired and lives in Norfolk.

Here at Mind, we’ve collaborated with the Craftivist Collective to create ‘A positive note’. It’s a crafty kit with a unique fabric envelope for you to stitch, along with a notecard for you to write a message to your MP. It's a form of gentle activism that hopes to change the world, one stitch at a time. Below, Mind campaigner Annie writes about her experience creating a positive note and sending it to her MP, Clive Lewis.

As a girl, I was taught by my mother to sew my own clothes. Since then, I’ve been interested in most craft skills that come my way. I’m not really that accomplished but I find crafting fun and good to tackle. That’s why I was intrigued when I heard about Mind’s craftivism kit called 'A Positive note'.

I learned that it was an awareness raising campaign where you stitch 'a positive note' to your MP, asking them to help raise the bar for mental health. I liked that it was more than just fundraising, and that my craft work would be part of influencing a better deal for people with mental health problems. 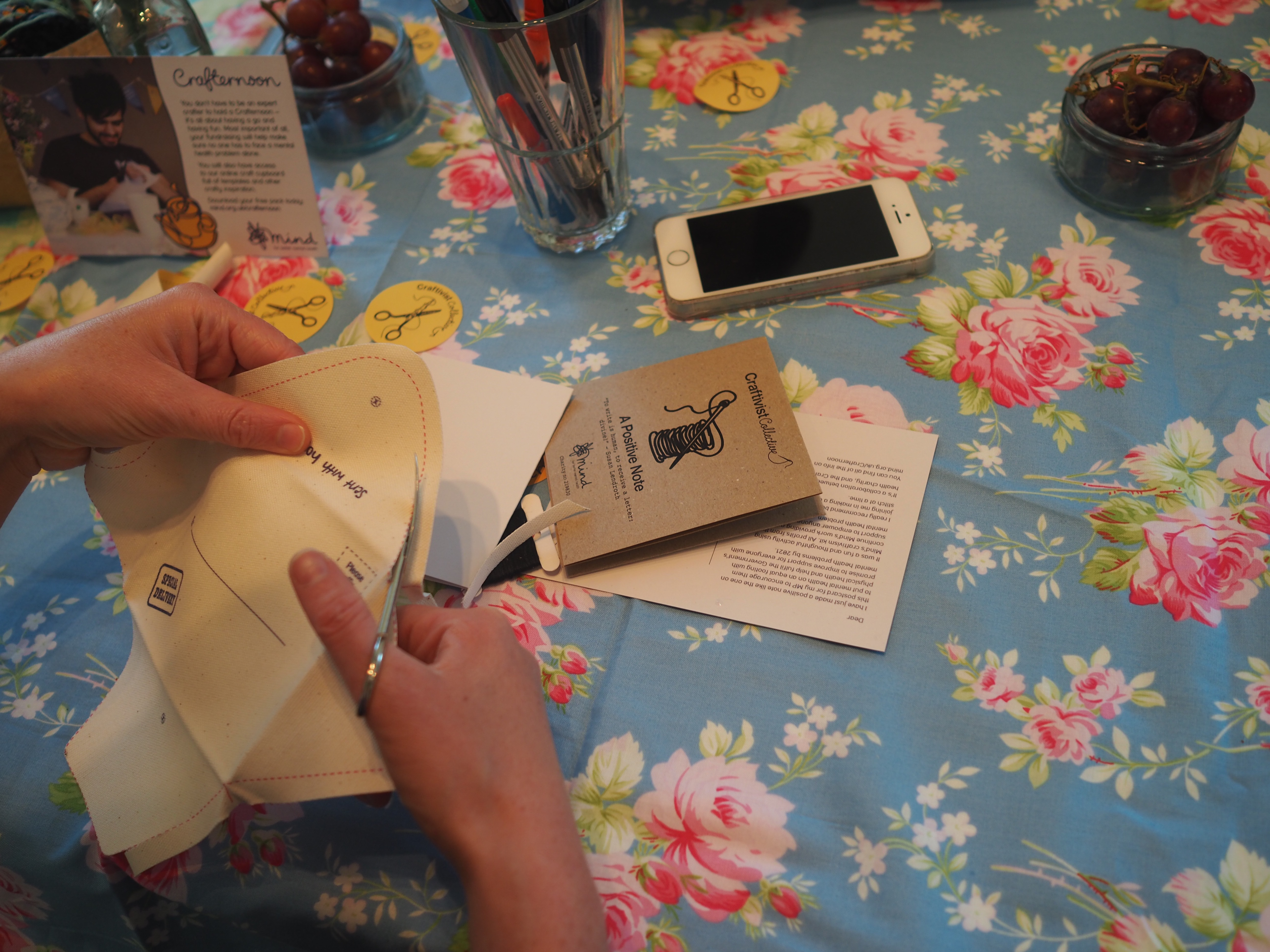 I decided to give it a go, sent off the donation and awaited the arrival of my kit.  As well as all the materials I needed to make the note it also included prompts to encourage me to think, while stitching, about the current issues that people with mental problems face. These are called “crafterthoughts”. It was a bit like guided imagery and I found it an interesting experience.

I live in an area which saw the first Mental Health Trust to be put into special measures. I have close friends who are struggling with mental health problems without the support they need because there is so little available. And of course this also deeply affects families and friends. Things are so difficult here that we have taken matters into our own hands by starting a local campaign to save NHS Mental Health Services in Norfolk and Suffolk.

"I wasn’t so pernickety about the stitching and I was more focused on making a positive impact."

So while clumsily jabbing my fingers with the needle, I had a lot on my mind and was able to sift through my feelings as well as distill the essence of my message to my MP. And oddly enough, in the end, I wasn’t so pernickety about the stitching and I was more focused on making a positive impact.

My MP is Clive Lewis. I’ve met him several times and I do have a lot of respect for him. At the very least I wanted to encourage him to vote in support of the Mental Health Units (Use of Force) Bill, which is trying to reduce the use of restraint against mental health patients. Beyond that I wanted to convey how important it is to me that mental health services are protected and improved. Our NHS is a national treasure and extremely precious. It is far too important to be left to the whims of personality politics. It is my health service. I need to fight for its survival and I needed Clive Lewis’ help.

In the end I phoned Clive Lewis’ office to arrange to take in my work of art, gentle protest, workmanship and supplication, as well as my big smile and high hopes. Alas. He was in London for the next week at least… so I posted it. But the lady in his office promised he would see it and even asked a few questions.

I did receive a lovely reply from Clive Lewis a week or so later. And he did vote. It was worth the pin pricked fingers after all!

Why not get your own kit and host a Crafternoon this year. Stitch a ‘positive note’ for your MP and encourage them to show their support for everyone experiencing a mental health problem and help us achieve real change, once stitch at a time.