It takes a long time to change a culture

Police Officer Becky blogs on changing workplace culture around mental health in the emergency services and the impact of her work as a Blue Light Champion.

I’ve been with Devon and Cornwall Police for just over 12 years as a PC. I’ve been on the frontline for most of that time.

In 2012 I had a baby and suffered from severe postnatal depression, and when I came back to work I felt there was a real lack of openness and support. I wanted to do something about that, so I started putting together meetings around peer support.

During that at some point I stumbled across Mind's Blue Light Programme, and I thought: this is great – here is a reputable charity doing stuff externally to try and help the services. So I started engaging with them.

The main role of the Champions is to have a conversation about mental health every day at work, and then to signpost people elsewhere. I’m known as the mental health guru in my area now; if anyone has a mental health problem they come to me, which is nice.

"I'm known as the mental health guru in my area now."

On average I would support one person per set of shifts – every 10 days or so – which is perfectly manageable. But in the run-up to Christmas, which is a difficult time for people who aren’t struggling with their mental health issues and even more difficult for people who are, I had somebody different coming up to me every shift I was at work.

It was a bit difficult, but if someone wants to talk to me about mental health I’m not going to turn them away. They weren’t long-term support needs, which made it easier to maintain boundaries. I took myself off the force's intranet peer support network page so that no-one could request me for longer-term support, because I recognised that I had no capacity for this. I have a really good support network too, so while I was supporting people that way I was also accessing support from other colleagues.

The programme has definitely raised awareness, and that is the feedback I’ve had from senior management too. The top ranking officer in our local area wrote to me saying they were really grateful; that I had made a huge difference, that people were getting more support, and that there was more awareness and less stigma.

"The top ranking officer in our local area wrote to me saying they were really grateful; that people were getting more support."

I have been massively supported by management. The chief constable signed the Blue Light pledge about two months ago; he is very open to whatever needs to be done to improve things. And my local commander has given me so much time over the past year. They could not have done any more to support me. 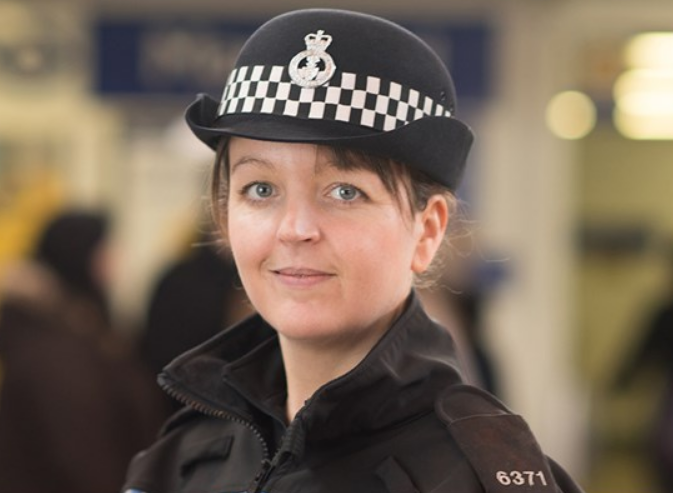 It takes a long time to change a culture. For a long time the perception from police officers, and probably from the public as well, has been that the police are somehow different, somehow invincible, and they shouldn’t experience mental health problems – that they should be stronger than that. And that’s total rubbish. We are human beings, and we have mental health problems the same as everyone else.

"It takes a long time to change a culture. We are human beings and we have mental health problems the same as everyone else."

I think internally that message is really slowly starting to get through. It does start with people having those conversations. This is just the beginning.

It was nerve-wracking before I went on, but it went very well. I had designed it so it was quite hard hitting and controversial – hopefully it made them sit up and pay attention.

Off the back of all this, because I enjoy working with Mind, I also joined the perinatal working group and spent one or two days a month in London with the group designing products for women with postnatal illness until that project came to an end. I’m not sure I would have applied for that without having that Blue Light Programme experience. It has been very empowering.

What impact has the Blue Light Programme had for emergency services staff so far? Find out here.

Richard, a firefighter and advocate for Mind's Blue Light Programme, shares his story.

PTSD and the ambulance service

Ambulance worker Dan shares his experience of PTSD and why he's part of a team walking for six days to raise money for Mind's Blue Light Programme.

Regie blogs on his experience of mental health problems & raising awareness with his 999 colleagues.

Why mental health support is so important for Welsh police

Rhiannon works for the Welsh police. She shares her experience of mental health problems, how her job affected them and why support is vital in the emergency services.
More similar stories