It saves to spend on mental health

James, one of our Voices of Mind, writes about how better funded mental health services could have helped him recover sooner and why the next government should make greater investments in prevention.

Mental health problems come with an array of costs. From my experience of visiting Parliament and speaking to politicians as a Voice of Mind, it often seems that the foremost consideration for the government in relation to mental health is the financial cost of providing NHS services. Mental health services – whether inpatient or community, specialist or general – cost money to deliver. Ahead of the general election, when government spending and the budget are being considered, it is important that all political parties are aware of the role of mental health services and make the right decisions about how much money they are allocated.

Yet when you are living with the daily reality of a mental health problem, the real cost is less about finance - it is more personal. During my recovery from a major eating disorder, I look back and realise just what I lost over the years of illness. Anorexia and bulimia took a massive toll on my relationships, the jobs I had, even a career in medicine – all of which I had been willing to give up when in the grips of entrenched eating problems. Bulimia has cost me thousands of pounds, and the physical consequences of starvation and purging nearly cost me my life on many occasions. The emotional dysregulation that was fed by not being taken seriously when seeking help expended my dignity, and at the peak of my distress even led me to attempt suicide.

The consequences of mental health problems also extend beyond conventional NHS services, often meaning people need support with housing, unemployment and benefits. I have been lucky enough to have been supported by the government when my health has meant that I couldn’t work and needed to focus on getting the right treatment and engaging in therapy. But that therapy was a long time coming. Having waited six years to access any specialist treatment for my eating disorder, I found it incredibly difficult to challenge ways of behaving that had become almost part of my identity. During the first years of my eating problems, the services that could help me simply didn’t exist. It was investment locally that meant I could finally access specialist support and not rely on being patched up by emergency treatment only when my problems became physically life-threatening. 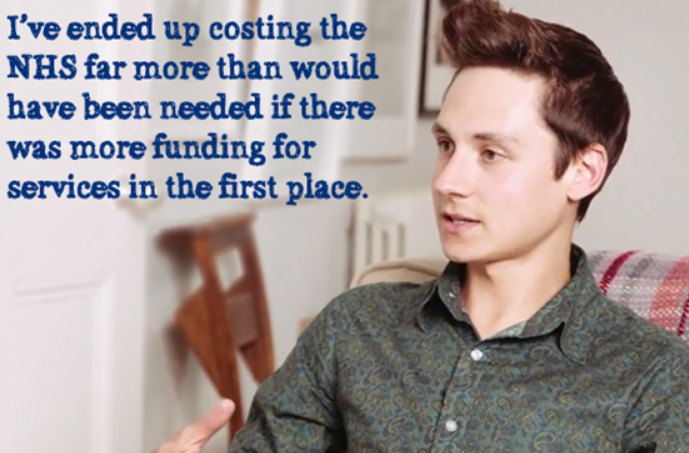 ]Reflecting on my experience can lead me to feel very negative, because the costs were only so great because services were not there when I needed them. To a degree, I believe things didn’t need to get as bad as they did if there had been adequate investment in the mental health services supporting me. Having experienced services which simply didn’t have the resources to be effective (yet were still being cut), it seems obvious that had more money been spent on early intervention or more intensive support when I really needed it, then there would not have been huge costs for the NHS to pick up later down the line, when I was more severely ill or admitted to hospital. Mental health services really are a case of spending to save.

I would love to see a government which had the aspiration for people to live with greater wellbeing and help them to get there by investing in appropriate, well-equipped mental health services. I am dismayed when I see cuts like the reduction of support worker time in my own treatment team – work which enables people to live independent lives without relying on traditional services. It seems such a false economy to underfund services when mental health problems cost society so dearly. Investment in promoting good mental health and wellbeing is just that – an investment, which will pay returns both financially and in improving the quality of life of people like me. I’ve ended up costing the NHS far more than would have been needed if there was more funding for services in the first place, and that is a situation where nobody wins. Mental health spending saves money and lives.