Depression, family and running a 'Rocky Road' for my brother

Back in 2013, Simon Whitehouse started an epic quest of ultra marathons to raise over $1 million for Mind. Next month, Simon kicks off a 152 mile non-stop run from Sparta to the Acropolis in Greece. Simon blogs about why his brother's experience of mental health inspired him to run "Simon's Rocky Road" and shares his own struggles with mental health.

Growing up my brother and me were great. Our parents were amazing and we were tight as a family. I looked up to my big bro. We would play together for hours conjuring up crazy adventures.

We used to watch the Rocky movie and always dreamed of being Rocky Balboa. But Dad was our ultimate idol. He was like Batman, Superman and Spiderman all rolled into one.

It all changed twenty years ago when my big bro had a breakdown. He was 20 years old. We were clueless about mental health then and didn’t know how to recognise the signs.

"I tried to stay strong – to be a super hero for the family – but a few months later I crumbled."

In just six-months he went from studying at university, having a girlfriend, beating the county champion at tennis, to being sectioned for a year.

My bro spent a further two years in a care centre. Since then he’s lived alone, close to our mum. He gets regular visits from social workers and staff from a local Mind. He takes medication. He can’t really work and its left him without many so-called ‘normal’ things in life that many of us take for granted.

What happened with my bro left me with what some people call well sibling syndrome. Being the so called ‘well’ sibling can bring tremendous guilt, and that guilt can fuel a drive to atone for any lack of opportunity available to the ‘unwell’ sibling. It’s like having the burning ambition of two people inside one.

"My brother turning forty and the realisation that his breakdown has affected exactly half his life inspired me to do something extraordinary."

It’s driven me to the top in my career, where I’m the CEO of an incredible brand in the fashion industry. I have a fundamental principle in business which is the importance in the equality of human beings, with the health and the family the number one thing transcending all hierarchy. All through the journey my bro has always been an inspiration for me, as he still is now. 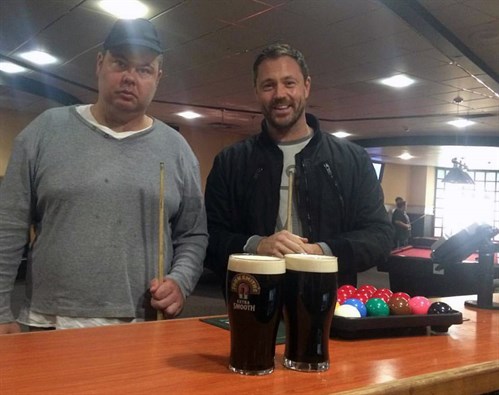 "Along the way I’ve had my own ups and downs too."

Dad died suddenly ten years ago. When I heard he was unwell, I immediately quit my job with DKNY in New York to come home to the UK to be with him. But it was too late. Cancer killed him inside four months. I tried to stay strong – to be a super hero for the family – but a few months later I crumbled.

"I didn’t understand what was going on. I binged on food and alcohol to escape."

I spent four days on the floor in the lounge, staring at the ceiling. I was void of all feeling – like the weight of the world had imploded on me to leaving me floating in outer space with no lifeline back to earth. I gained over three stone. Depression hit me hard.

I became an expert at hiding it from everyone. The shame was too much and the wall of stigma seemed too high to open up and ask for help. Not only that, but depression clasped its jaws around my neck like a Rottweiler, blocking my ability to talk. That’s a part I think a lot of people don’t understand. Even if I wanted to talk I wasn’t able to.

I didn’t understand what was going on. I binged on food and alcohol to escape.

I went further and further within myself until one night depression finally beat me to my hands and knees. In the middle of the night, alone, drunk, and writhing around like a snake on the floor, I gave up and was going to take my own life.

"I took three months to train, and battled through hypothermia and hallucinations to complete it."

The only thing that stopped me was the voice of my dad: “when any beast is down on the floor you know it’s time”, I remember him saying. I called one of my best friends. Fortunately, he picked up. All I could say was “come, please”. If my friend didn’t pick up that night I would not be here today.

I’ve lived with depression now for over ten years. Exercise definitely helps. I jog and swim regularly. I also love gardening, which I used to do with Mum growing up. Nurturing a garden is very fulfilling and relaxing for the mind. But depression is always there, that black dog always walking alongside you. It can show its ugly face at any time, just like a common cold can.

My brother turning forty and the realisation that his breakdown has affected exactly half his life inspired me to do something extraordinary.

We used to watch Rocky as children and always dreamed of being Rocky Balboa running up the legendary MoA steps in Philadelphia. So, in honour of his 40th birthday I committed to run for 100 miles non-stop from New York to the Rocky steps (that’s like four continuous marathons).

"I realised that I was not alone and that helped me a lot."

I took three months to train, and a battled though hypothermia and hallucinations to complete it in 29 hours non-stop, raising a lot of money for Mind and awareness of mental health. 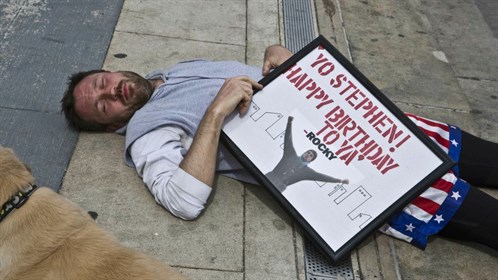 I wrote a blog and hundreds of people wrote to me sharing their experiences. I realised that I was not alone and that helped me a lot. It was, and it still is, a very cathartic process for me and I plan to run more ultra-marathons in different countries.

We’ve raised over $30,000 so far and just like Mind won’t give up until everyone experiencing a mental health problem gets both support and respect. I won’t stop until I’ve raised $1M to help them do it. I call it Simon’s Rocky Road.

A few weeks ago my bro sent me this text message:

“I went to see Mind staff the other day, I miss them, they were like mothers to me."

This is why I run for Mind.

So, my brother and me, now we’re both kind of OK I suppose. As long as Mind is always there then we’re both OK in our own little worlds.

Evan Williams tells us why he is attempting to smash world record for Heads Together.

A letter to suicidal me

Amy blogs about how a holiday to Edinburgh Festival and Mind's info on suicidal feelings helped her.

My experience of feeling suicidal

Regie blogs about his experiences of feeling suicidal and how he found support.
More similar stories