Last night was the season finale of hit ITV series Cold Feet. We sat down with series writer Mike Bullen, to talk mental health, the character Pete's experience of depression and what's next for series 7.

Last night the season finale was watched by over 6 million people! Looking back over the season what’s been your highlight?

It sounds self-serving but, honestly, the reaction of viewers. I thought we’d made a good show that we could be proud of, but I’ve been absolutely blown away by the audience response. So many people have said that this new series is even better than the original. That’s massive.

The character Pete’s struggle with depression has received a lot of praise for its realism. Why did you choose Pete as the character who developed depression?

Because in many ways Pete seemed the least likely. He’s an easy-going family man. You’d think nothing would bother him. I wanted to make the point that depression can afflict anyone, at any time. You just don’t know.

Why was it important to you to feature a mental health storyline?

I could claim I was working to some higher purpose, but truthfully, I just thought it was a storyline that I could mine for both humour and pathos. That made it perfect for Cold Feet. We could have fun with Pete appearing to just be a grumpy middle-aged man and then stop the laughter dead and say, actually it’s a lot more serious than that. 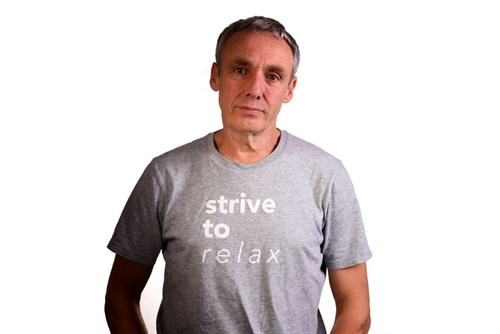 How much of the storyline was based on your own experiences and how much was fiction?

The symptoms were all based on my own bout of depression about 8 years ago. The lack of sleep, the inability to make even the most mundane decisions, the not wanting to be on my own, the inability to get off the sofa. I never fell into the abyss and contemplated suicide, like Pete does, but I stared over the rim into its depths, which was enough to allow me to write Pete’s lowest point.

How did you work with John Thomson, the actor who plays Pete Gifford, to prepare for filming?

I didn’t really. I was locked away writing the rest of the scripts. But John has been to enough dark places of his own (addiction, divorce, work slumps) that he had reservoirs of experience to draw upon; he didn’t need my input. When I watch his performance, it gives me chills. He completely nailed it. I hope he gets nominated for acting awards; he deserves to.

You’ve done such a great job of raising awareness of depression – what else do you think needs to be done to remove the stigma that sadly still surrounds it?

I was never embarrassed to admit my depression to others. I think being a writer I had a ‘get out of jail free’ card, in the sense that people saw it as part of the territory of being ‘creative’. I’d like to see that consideration afforded to anyone suffering depression. I think as more and more people admit to being afflicted, so depression is increasingly being ‘normalised’ and the stigma reduced. I hope sufferers might be able to find the strength that they can say “I’m suffering depression. Deal with it. I am.”

TV dramas are a powerful tool to communicate messages into millions of homes. Do you think the industry could do more in their portrayals of mental health?

It’s difficult. I really respect The Archers for painting such a truthful portrayal of domestic abuse. They told that story over the course of two years, which is why it was so authentic. Most shows don’t have that luxury. Unless you’re one of the soaps, you have to tell a story in 6 or 8 episodes. It’s difficult to do a subject real justice within that time-frame. We took short cuts ourselves.

The scenes where Pete contemplated taking his own life were shown on World Mental Health Day. Was this deliberate?

It would be great to say ‘yes’, wouldn’t it, that it was all part of some great strategy by ITV. But, no, it was complete coincidence. A happy one, though, because it drew more attention to the storyline, and the issue underlying it.

The male suicide statistics are shocking with suicide the biggest killer of men under the age of 45. Why do you think men find it so hard to open up about their mental health?

That’s easy. Because centuries of tradition have determined that for men to admit to vulnerability is a sign of weakness. And blokes are meant to be strong. Never mind that it maybe takes strength to admit to something that’s perceived as a weakness. Stereotypes are so tiresome.

Do you feel like you have helped people with mental health problems by including this storyline?

Hmmm. A handful of individuals perhaps, which is something to celebrate in itself. But in the grander scheme of things, I’m not sure a TV show like Cold Feet, which after all is really just seeking to entertain, can make that much difference to society. We’re just part of the drip, drip, drip that ultimately causes the sink to overflow. At best we’re two of the drips, but that’s better than nothing, isn’t it?

Have you had any feedback from viewers about how Pete’s story has affected or touched them?

This for me has been one of the most gratifying aspects of this series. I’ve had a number of emails and messages from men who’ve said how much they appreciated seeing their experience depicted on screen. That means a hell of a lot to me. One guy, a complete stranger, went to the trouble to write and say the show had ‘enriched’ his life. I shared that with the rest of the production team, because I felt, “yeah, we done good and we should all feel proud of that”.

What’s your favourite moment from the season?

It’s the moment at the end of episode 2 when Jenny returns home to learn from Adam that Pete is suffering depression. Pete’s huddled at one end of the sofa. Adam looks on as Jenny takes her husband in her arms, then he withdraws, leaving them to it, as Pete breaks down and sobs. It was beautifully directed (by Terry McDonough) and in one shot communicates friendship, love, sensitivity and pain. It moves me to tears.

Is there a moment from this season that made you laugh when you were writing it?

That’s one of the joys of writing, an unexpected moment when, apparently out of nowhere, a funny thought or line pops into your head and catches you off-guard. One I remember is when David’s in prison. He phones home to speak to Karen but gets his daughter who thinks he’s in Germany. David quickly improvises, breaking into German: “Ein moment bitte, ich bin auf der Telefon”, as a bemused fellow-con walks past. In my mind’s eye I could see how Robert Bathurst would perform that moment (with brilliant comic precision) and it made me snort out loud.

It can be really hard to open up about our feelings when we’re struggling. For anyone who has watched Pete’s story and feels like they are going through the same thing but are finding it hard to open up or ask for help, what would you say to them?

DON’T BOTTLE IT UP! Seriously. People die from depression, and I suspect that many of those who are driven to consider desperate measures have felt unable to reach out and ask for help. Whether it’s your loved one, your friends, or a doctor, it doesn’t matter. Depression is a vicious b***ard, that I would imagine is really difficult to defeat single-handedly. Do not let pride, or embarrassment, or some other self-inflicted emotion, stand between you and taking steps towards recovery.

Pete has an incredible support network (his wife, friends, children). What can people do if they don’t have this?

Sheesh, you’re asking the wrong guy. I was fortunate to have amazing support from my wife and family. When I wrote about this in Cold Feet, I was keen to show how depression is difficult for those close to the sufferer too. Jenny was in the impossible position of having always to be sensitive to Pete’s state of mind when occasionally (being Jenny and human) she just wanted to shout at him. In my mind, she’s as much a hero as Pete. If people don’t have that support network… start by going to your doctor, that’s what they’re there for. Beyond that, turn to the help lines and organisations (including MIND) that exist to provide support. But reach out!

We’re super excited about season 7! Have you started on it and can you give us a sneak peak of what’s to come?

I have started writing, yes. We start filming on 10th March, I think it is – it seems ages away now, but it will be upon us all too soon I know. Can I give you a sneak peak? Why would I want to do that? And anyway, at this stage I’m not sure myself!

What’s next for Pete?

I don’t expect his depression to recur (as a scriptwriter my feeling is ‘been there, done that’), but it’s now a part of him, and he’ll always been mindful of keeping it at bay. I broke my shoulder back in February. It’s better now. But I’m careful not to put too much stress on it, just in case. Pete will take a similar approach to his mental state.

If there was one message you wanted viewers to take away from this season, what would it be?

That we’re all human, all flawed, all trying to get by as best we can. That we’re all connected, whether it’s within our families, friendship groups, communities, or society as a whole. That’s more than one message, but what can I tell you – I have high ambitions for the show…

Mental health in the media

Mind Media Awards: A Review of the New Media Nominees

@femaleptsd reviews the VMG Mind Awards drama category for us.