44 marathons in 44 days: Running across Europe

You might remember Pete from his previous blog, where he talked about mental health and his very ambitious fundraising plan. He’s back to tell us how it went and how much he achieved in just 44 challenging days.

I used to be one of the top 100 marathon runners in the country, with a personal best of 2 hours 25 minutes. Then something changed. In April 2016 I felt lost, unhappy and was struggling with what to do with my life. I had always used running to support my mental and physical health, but I now resented it.

I needed a way to reclaim running – to make it something I loved to do again. So I came up with an idea: I’d use running to make a difference, find a new focus and support a cause that I truly believed in.

That’s when Marathons for the Mind was born. I challenged myself to run 44 marathons, across all 44 European countries, in 44 consecutive days.

"I challenged myself to run 44 marathons, across all 44 European countries, in 44 consecutive days."

After months of planning I managed to piece together a route which would enable me to travel between all 44 European countries, in 44 days. I had no idea if the route was the most efficient or, more importantly, if it would even be possible. On paper it looked do-able but there was so much out of my control.

As I stood on the makeshift start line in Russia back on 1 April, I honestly had no idea what was going to happen. Ahead lay 1100 miles of running, 11,000 miles of travel and one intense life changing experience. I was scared, and I was nervous, but I felt alive. 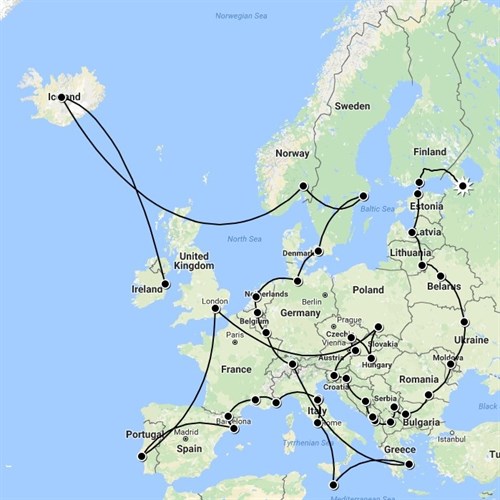 I set off tackling marathon after marathon, travelling between countries I had never seen before. Belarus, Ukraine and Moldova were quickly ticked off the list as I made my way around Eastern Europe. The four hour bus journeys were the straightforward routes. Other times I had to spend nine or ten hours on a mini bus or train – those were much harder.

Somehow I was doing it, taking it one day at a time and feeding on the growing support I was getting from friends and strangers. It is hard to overstate how much of a difference this support made. There is no way I would have even started it without this support, and certainly no way I could have finished it. I am eternally grateful, and also to anyone who donated or sent messages of encouragement and opened up about their own mental health.

"I ran the race with my brother and joined the army of runners lacing up their shoes for mental health. I felt so inspired."

Almost exactly half way into the journey came the London Marathon. In between flying in from Poland the night before the race, and out to Portugal the morning after, the marathon was everything I had wanted it to be. I ran the race with my brother and joined the army of runners lacing up their shoes for mental health. I felt so inspired.

I took this inspiration with me on the rest of my journey. I ran in and around the Vatican City, Monaco and San Marino. Countries which I can confirm are not designed for running marathons in! Then I came back through Scandinavia, Iceland and went on to Dublin. As my feet hit the ground in Dublin airport I finally started to believe it was possible. There was no more travel, nothing left outside of my control. For the first time it was entirely in my own hands.

"As my feet hit the ground in Dublin airport I finally started to believe the challenge was possible."

That last day will always be a day I will never forget. With the support of my family and friends I made it to the final finish line. I completed my dream and I achieved everything I had set out to and more. I had averaged at just over four hours for each marathon and travelled the equivalent distance of London to New Zealand. In the end I took 22 Trains, 12 Planes, 6 Buses, 5 Cars and a solitary ferry – and raised over £18,500 for Mind and Livability Holton Lee.

I want to carry on running and take on other adventures, to travel and to inspire others through speaking. I want to do all of this to raise awareness and encourage a more progressive approach to mental health in the UK.

When or what the next adventure will be I’m not sure. Until then I will be talking about my adventures and trying to help people realise what we are all capable of.

Has Pete’s ambitious feat inspired you? Join him and all of our other amazing fundraisers getting active for Mind – find out more here.