Jon talks about growing up watching his brother face prejudice and why that inspired him to fundraise for Mind.

Jon is Managing Director of a creative agency in London. He started Shaveril to raise awareness of men's mental health and to raise money for Mind.

I grew up in a family affected by mental health problems. My older brother was diagnosed with bipolar disorder as a teenager and spent a large chunk of the following 20 years in hospital. Visiting him there, I became aware of the differences in care for patients with mental health problems, compared to those with physical health conditions.

It wasn’t that the staff were any less caring or compassionate – some were truly incredible – but there simply didn’t seem to be enough of them. The wards were also often in a poor, unloved condition – certainly not a great environment to help people get better.

Mental health problems have had a massive impact on my brother’s life. In his case, bipolar disorder has robbed a highly intelligent and caring man of a chance to have a career or raise a family, things that most people would take for granted. But in many ways, he’s been lucky – he has a loving and supportive family and a close network of friends he can rely on. I’m very aware that many people don’t have such a supportive network.

"Growing up I learnt that my brother’s health was something that people felt very uncomfortable talking about."

As a young child I found this quite hard to understand, because to me nothing had really changed. He was still the older brother I loved going on day trips and having adventures with. It was just that he was ill and needed a stay in hospital to help him get better.

After it was clear his problems weren’t a blip that he would “get over” quickly, family and friends stopped asking after him. It was like they thought he had disappeared. I don’t think they were purposely trying to be cruel, but the prejudice around mental health problems led to a huge amount of awkwardness.

"People found it easier not to talk about him."

I know what you’re thinking, what does that even mean? Shaveril involves people shaving their beards in the month of April. Shave + April = Shaveril!

We wanted to reach out to young men as suicide is the leading cause of death in men under 35. Although this a very serious message, we thought the best way to approach this was with something fun. We’re based in Shoreditch, London and find ourselves surrounded by moustaches, mutton chops and finely groomed beards – indeed all of the men in my office sport facial hair.

"While Movember is an amazing campaign, we didn’t feel growing more facial hair was quite enough of a challenge for our hipster friends and neighbours."

We asked people to put their beards on the auction block, set up JustGiving campaigns and commit to liberating their chins. We were chuffed with the response, people from all over the country took part – we even had a shaver from the USA. 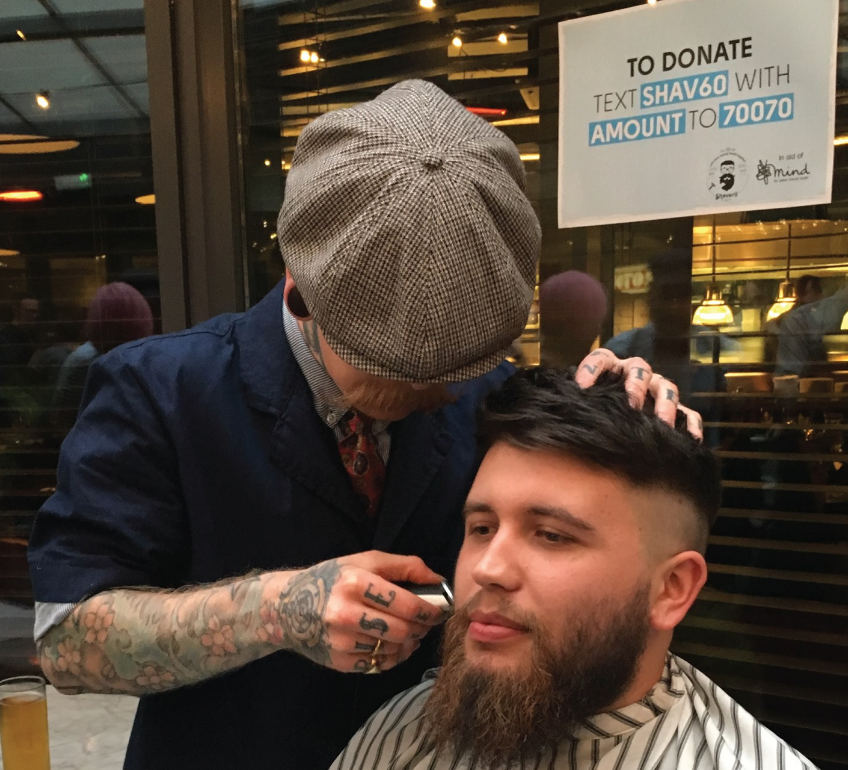 To celebrate the campaign, we hosted a fundraising night at the Hoxton hotel in Shoreditch, where London’s finest barbers were on hand to offer a luxurious wet shave to remove any stubborn beards that had survived to the end of the month.

This is the second year of Shaveril, and we are excited that we have raised three times more money than last year, shaving 50 beards and finishing a whisker (pun intended) off our £10,000 target. We are also really thrilled by the wider impact it’s having. A post we shared on Facebook spelling out some of the simple facts around young men’s mental health has been viewed more than half a million times and generated a considerable amount of debate and discussion.

We’re already making plans to make next year’s bigger and better – raising more funds for Mind’s work to improve awareness and ensure everyone with a mental health problem gets support and respect. Being able to rid Shoreditch of its beards is just an added bonus.

If you'd like to find out how you can fundraise for Mind, visit this page of our website.