Toby Brown blogs about his experience of mental health problems and his new exhibition in aid of Mind, Behind the Smile, that includes portraits by Toby of Alastair Campbell, Anna Williamson and Amy Winehouse.

It all started in 2008. The recession had just hit. I had a £120'000 mortgage, a secret £30'000 credit card debt and the family run business was on the brink of collapse. I’d had no wages for 6 weeks, and letters were arriving from bailiffs.

And on top of it all I had a family to support.

I slumped into a very dark and lonely place. I wasn’t sleeping and I thought constantly about losing all I had worked for. It all came to a head one day when I decided to see my Doctor.

He took one look at me:

Hearing those words, I broke down in tears.

He prescribed me antidepressants. A few weeks later I started to have regular visits to a psychiatrist.

But I found I wasn't able to open up. I thought I knew best how to escape the darkness that had surrounded me. So, as well as antidepressants, I self-medicated with illegal drugs. The voices soon followed.

"I was awake all night, every night, recording the voices on a dictaphone."

A part of me knew it was wrong but I couldn't help myself. I had lost control. My family took over the day-to-day of my life. Paranoia pushed me away from them. I thought I knew what was best for me.

Before I knew it, as well as the illegal drugs, I was on a cocktail of antidepressants, sleeping pills, and Olanzapine.

The voices in my head took over and I'd created my own world. A world that I thought was reality. What started as depression was rapidly leading to doctors labelling me as a paranoid schizophrenic. I was in a drug induced psychosis.

"Sadly I had no choice but to start over on my own."

I was awake all night, every night, recording the voices on a dictaphone. I would spend all day listening to the recordings, looking for proof the voices were there.

Finally I had to come clean about my self-medicating, and get help.

Soon after a rather embarrassing incident with the recordings I was admitted to hospital. I remember, it was the Thursday before Good Friday 2009. Easter will always make me sit back and reflect on that day, it was horrible.

Soon after leaving hospital, my marriage started to break down. And sleeping on the sofa wasn't doing anybody any good. I had hit rock bottom.

Sadly I had no choice but to start over on my own. I left my job and moved into an old caravan in an industrial unit.

I began to start painting a series of three self-portraits showing people what was going on underneath the false smiles.

"When I'm low I'm told my eyes become lifeless and empty and that is what I wanted to capture."

In 2012, I showed them at a group exhibition in Brick Lane. It was at this show that I was approached by a psychiatrist. We started talking about the power of art as a therapy, and how it can send a message and create understanding, better sometimes, than just words alone.

We are still not there yet, but since 2008 things have changed dramatically. I have just opened my latest exhibition “Behind The Smile” in aid of Mind.

The closer the exhibition gets the more overwhelmed I am by the support and praise for what I am doing. It's a subject that over time I have noticed that people are opening up more.

"Mind helped my parents gain a better understanding of what was going on."

I want to start a ripple effect, one that will grow and grow, and soon there will be no stigma attached to mental health problems. If people can't talk about their feelings, hopefully they can express themselves through art.

Each portrait was approached the same way, but by using different colours in each. The colour palette depended on what I picked up from each person I met or spoke to.

"I hope that my work gives something back, to those who helped me."

The faces don't really have any importance in the portrait in the sense that they are not as detailed as the eyes. The eyes tell the whole story and show all the battle scars. When I'm low I'm told my eyes become lifeless and empty and that is what I wanted to capture. The eyes can't lie, they always show what the mind is thinking.

It is important for me to do something like this for Mind. Mind helped my parents gain a better understanding of what was going on with their son. I am very thankful for that. I can now talk to my parents in a way where I am no longer ashamed of how I have felt...and how I feel now. Thank you. Now it's time for me to do this for Mind.

This brings me to where I am today. I hope that my work gives something back, to those who helped me. 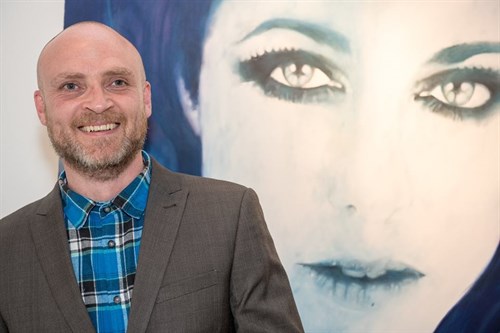 Toby Brown at the opening of 'Behind the Smile'

My letter to depression

Garry shares with us what he would write if he were to send a letter to his depression.

How I came to understand my girlfriend's depression

George blogs about how he came to understand his girlfriend's depression.

Being diagnosed with depression

Becca shares her experiences of depression

Dear you: an easy way to start talking about your depression

"If I had a broken leg I know you'd make allowances for me and help in any way you could." Stacey blogs about how hard it is to talk about depression and suggests a letter you can use as a template.
More similar stories