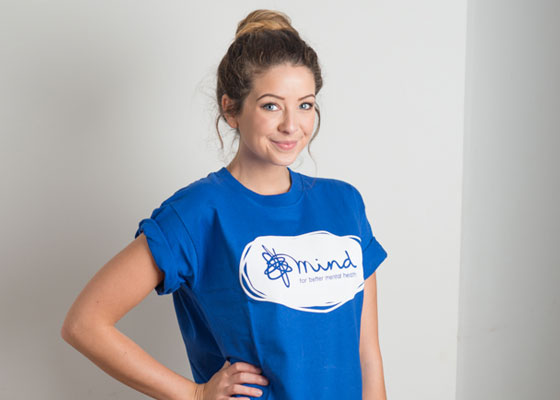 Mind has unveiled YouTube star and teen icon Zoe Sugg as its new Digital Ambassador. Her role is announced today, as Zoe launches the initiative #DontPanicButton, to raise vital awareness of anxiety and panic attacks in young people.

Through her vlog Zoella, Zoe speaks to over 8 million subscribers about beauty, fashion and the adventures of her life. However she has also used this channel to share open and honest accounts of her own battles with anxiety and panic attacks.

This week Zoe will launch the initiative #DontPanicButton, supported by Mind. The campaign will shift the concept of a panic button, making it a sign of positivity and a symbol of support for anyone experiencing anxiety. Zoe will ask those who battle anxiety, as well as their loved ones, to find and wear a red button as a mark of solidarity. Wearers are encouraged to upload a photo of them sporting their buttons using the hashtag #DontPanicButton to increase awareness and help others know that they are not alone

"I know just how isolating it can feel to experience severe anxiety. However, the overwhelming response I’ve received every time I’ve spoken out online shows just how many young people confront it every day.

I am passionate about the need for everyone to feel ok to speak out, to talk to friends and family about what they’re going through, to ask for help. That’s why I’m thrilled to be taking on my new role as Digital Ambassador at Mind. It’s an opportunity to raise further awareness and to work with a charity I love."

"For many, the internet and social media can be a lifeline. By connecting people with similar experiences and providing access to information and support, the online world has a significant role to play increasing awareness about mental health problems.

"Zoe is an inspiration to many and in speaking candidly about her own battles, has given others the confidence to seek help. We are absolutely thrilled to have her on board as a Digital Ambassador for the charity, and know that together we can have an even bigger impact in stamping out the stigma around mental health."