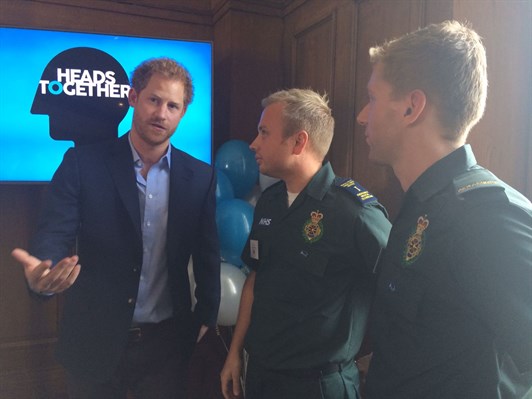 The Duke and Duchess of Cambridge and Prince Harry marked World Mental Health Day by celebrating the support we give each other through difficult times, at a special Heads Together event, which took place at County Hall and the London Eye.

Heads Together unites the Duke and Duchess of Cambridge and Prince Harry, along with Mind, and seven other mental health charities, to change the way we talk about our mental health.

Their Royal Highnesses heard first-hand from Mind media volunteers Dan Farnham and Richard McGhee about the support they received when they were at their lowest point.

Dan Farnworth, a Mind Blue Light Champion, was supported by his colleague Rich Morton. Following a job involving a horrific child abuse case, Dan found himself having nightmares, unable to shake the image from his head. Dan knew he wasn’t ‘right’ and called on Rich to help him talk things through. Rich helped Dan realise he knew what he needed to do; their conversation gave Dan the push to get help with his PTSD. Both Dan and Rich are Champions for Mind’s Blue Light Programme, helping people just like Dan realise they shouldn’t be afraid to talk and seek help if they need it.

Joining them at the event was Richard McGhee and his mum Sheran. When Richard’s partner miscarried their baby, he told himself to get on with it. But when Richard, who is from Taunton and works in the Fire Service, attended a road accident where the casualty was pregnant, something just turned in him. Richard suffered huge mood fluctuations and had to take time off work. At his lowest, Richard planned to take his own life, but his mother Sheran was there to support him. Sheran never judged and tried her hardest to understand her son. Now Richard is a Champion for Mind’s Blue Light Programme, and he helps others – just like his mum did for him.

"One day I thought I’d drop Rich a text to see if he was around for a chat. Within minutes, Rich was calling me. He came straight round to mine and we had a cup of tea and just talked. The relief I felt for confiding in Rich overwhelmed me, and I wish I’d done it sooner. He reassured me that this wasn’t something to be scared of and we talked through my issues, and he helped me figure out what I needed to do.

"I realised that I already knew what I had to do, but the power of this conversation was all I required to push me into doing it. With Rich’s support I went to my GP and started to see a counsellor which really started to help me. I was eventually diagnosed with Post-Traumatics Stress Disorder I spent about four months off work, and had counselling throughout that time. Doing that, and having time for reflection, helped me a lot. As I found out, listening is the most important thing you can do. It showed me that I was never alone."

The Duke of Cambridge said:

"Catherine, Harry and I are incredibly proud to be working with you all to tackle one of the greatest challenges facing our society. Mental health is not a dirty word – we all have mental health like we do physical health, good or ill. But not seeking help at those times when it all seems too much, or we are depressed or anxious, can impact the rest of our lives.

"On the Heads Together journey so far we have seen the difference that a listening ear can make to people’s lives – whether a father supporting a child suffering depression, a soldier who has returned from a testing deployment, or a child struggling with the pressures of a new school.

"The three of us have learnt a lot in the past few months as we have met people. The conclusion we are coming to is that the more we all talk about this, the more collectively as a society we can do to support one another.

The Duchess of Cambridge said:

"All of us know someone who has been through difficult emotional times, and we know how hard it can be to see a way forward.

"William, Harry and I feel it is our duty to do what we can, with your help, to shine a spotlight on emotional wellbeing and highlight the support that is out there to prevent or manage the pain at difficult times.

"The three of us are coming to the realisation that more needs to be done to support people who are seeking help. Over the coming months, we hope to explore what else we can do to increase the level of service and support that people can receive. But first, as William said, we must tackle the stigma that stops people asking for help in the first place. We want to encourage people to talk to one another."

"William, Catherine and I want everyone to know how to give exactly the vital mental health support that you have talked about. It's not rocket science, but most of us don't know what to do if a friend or family member is suffering. Having some basic knowledge, and having the confidence to act on your knowledge, can make a huge difference to those around us – as Rich was for Dan.

"We will all experience pressure on our mental health at some point during our lives. The more we accept that, the better we can help each other. Catching it and recognising it early, saves lives.  So, it's time we ended the shame around mental health – the fear of judgment that stops people talking or getting help.

"All of us have mental health. So the more we all get behind this topic, the more we can help not just the individuals suffering, but also their entire families and work colleagues as well. Together we will break the stigma forever and save lives."

"We all have mental health, and just like physical health, it is part of everyday life and needs to be looked after. The support we give each other through difficult times is vital. In celebrating these stories of support together on World Mental Health Day, we can raise public awareness of mental health problems and empower more people to ask for help when they need it.

“Mind is thrilled to be part of Heads Together. Led by the Duke and Duchess of Cambridge and Prince Harry, it is changing the way that we think and talk about mental health and wellbeing. We are delighted that Their Royal Highnesses are joining the growing movement that is fighting to end mental health stigma.”

About Heads Together:
Heads Together brings together inspiring charities with decades of experience in tackling stigma, raising awareness, and providing vital help for people with mental health challenges. Charity partners include Mind, The Anna Freud Centre, Best Beginnings, CALM (The Campaign Against Living Miserably), Contact (a military mental health coalition), Place2Be, The Mix, and YoungMinds.