We have various social opportunities through the year, such as campaign briefings, drinks receptions, or dinners, where major donors can meet other high profile supporters, learn more about Mind's work, and engage directly with our leadership team.

These events are a great chance for us to thank you personally for your generous support and commitment. Read about some of our recent supporter events below.

On Thursday 12th May 2016, famous faces and Mind supporters came together at Mind’s inaugural Gala Dinner, raising £59,000 to increase the mental health support offered to children and young people.

The evening started with a drinks reception, sponsored by Addleshaw Goddard, where guests were treated to a unique performance of Carnet de Voyage by duo Mimi Xu and Rose Chan, and a performance by classical pianist James Rhodes.

The evening continued with an exclusive ‘in conversation’ with James Rhodes hosted by award-winning documentary filmmaker, broadcaster and author, Tim Samuels. James spoke about his own mental health experiences detailed in his memoir, Instrumental, which was recently published. It is a brutally honest, moving and compelling story that was almost banned until the Supreme Court unanimously overthrew an injunction in May 2015.

Dinner was followed by a lively auction with a fantastic selection of money-can’t buy-experiences and exclusive gift packages, led by Bonhams’ Caroline Oliphant. Lots included an original painting by artist Scarlett Raven, a Las Vegas holiday package and corporate hospitality tickets for the first day of the Open Championship 2016. 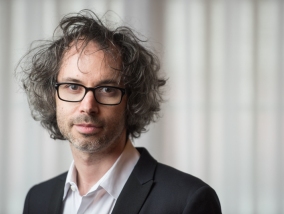 An Evening with Professor Tanya Byron

On 16 September 2014, Mind's CEO Paul Farmer hosted a special evening reception at the historic Royal Institution to thank Mind's closest supporters for their help and commitment to mental health.

Guests were invited to speak with senior staff and trustees over drinks and canapes before welcoming Mind's guest speaker, the acclaimed broadcaster and clinical psychologist, Professor Tanya Byron.

Tanya Byron made a powerful speech about the urgent need to address the lack of support and understanding of mental health in society, drawing on her own experiences as a clinician.

During the evening, guests were able to speak with senior Mind staff, meet like-minded supporters and learn more about areas of Mind's work. 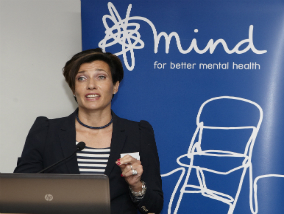 In September 2011, Mind's President, Stephen Fry hosted a star-studded gala dinner at the Imperial War Museum, to celebrate the launch of 'Mindful', an art exhibition and festival held at the Old Vic Tunnels to raise money for Mind's Creative Therapies Fund. Mind was organised and curated by one of Mind's ambassadors, the artist Stuart Semple.

Following an exclusive view of the exhibition, which included specially created works by world-class contemporary artists like Tracy Emin and the Chapman brothers, the evening continued with a black-tie dinner and auction in the main atrium of the Imperial War Museum. The museum was the original site of the Royal Bethlehem Hospital, known as "Bedlam".

Dinner was followed by a lively auction hosted by the charismatic Lord Dalmeny of Sotheby's. Lots included a day in the recording studio with the band the Kooks, a boutique Spanish holiday, and an original print by the artists Jake and Dinos Chapman. 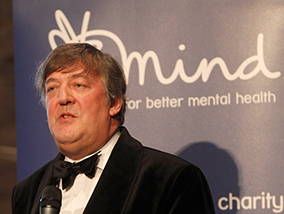 In September 2013, Mind's CEO Paul Farmer welcomed some of our most generous funders, alongside senior staff, a selection of our corporate supporters and high profile media contacts , to a late summer reception in the city of London, kindly hosted by Marsh UK.

From the Terrace of Marsh's roof-top hospitality suite, guests enjoyed an exclusive panoramic view of the Tower of London and Tower Bridge as the sun set over the Thames.

Edmund's moving talk, recounting his experience uncovering a previously unspoken family history of mental ill-health, moved many in the audience to tears. Many guests were touched and inspired by his reflections on the impact of mental health problems on families. 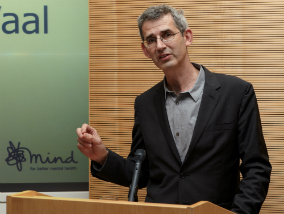 Princess Alexandra has been Mind's royal patron since 1969 and in February 2010 we hosted a reception at St James's Palace to celebrate Her Royal Highness's 40th anniversary in the role.

The Princess is a keen supporter of Mind, attending awareness raising events and, whenever possible, personally thanking our supporters and volunteers for devoting so much of their time and energy to our work.

The evening reception at St James's Palace was a perfect opportunity to acknowledge many of the inspirational people who have played a role in our past and to share our successes with those who make them happen.

Also at the event were many high profile visitors, including the actress Helen McCrory and Lord Melvyn Bragg, who gave an inspiring speech about his own personal journey, reflecting on our work in tackling the stigma that still surrounds mental health. 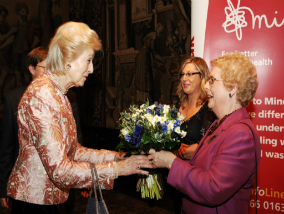